Oscar came into Lowhills Animal Sanctuary with his two siblings that had not been handled very much at approximately 5 months old. He was rehomed into a multi cat household and Oscar was doing very well and was turning into a very loving cat. One of the other males in the household who Oscar played with when he was a kitten grew up to become quite bold and confident and on several occasions tried to chase Oscar quite roughly and this knocked his confidence and was the start of him becoming more timid in general. He had other cat friends who he played with but most recently an entire male was coming into the garden and making Oscar fearful of going outside and was starting to spray inside the house which was becoming more frequent so Oscar needed some behavioural therapy to try and help him with his confidence and try to stop the spraying.

Lowhills Animal Behaviour Consultancy assessed Oscar and put him on a Behavioural Modification Program designed to increase Oscar’s confidence, make sure he wasn’t put into any situations which he couldn’t get out of and was also put on a small dose of anti-anxiety medication from the owner’s vets to help reduce the marking behaviour. Lowhills trained the confident, bold cat to come when called so if he did try and chase Oscar he could be given something else to do instead of chasing other cats.

Six months down the line Oscar has his own special beds, for him only, he has his own toilet area near the house so if he doesn’t want to go too far he can nip out and come back in quickly. He has been on his positive reinforcement training for confidence and this has boosted his confidence around other cats, including the entire male that comes into the garden as well as Oscar’s owners, who he now knows will help him get out of a situation he is not comfortable with and paws crossed his marking behaviour has stopped completely. The other cat has now been trained to come when called using only positive reinforcement and all the cats seem much happier. 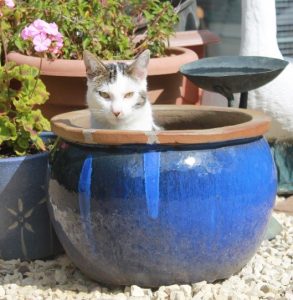 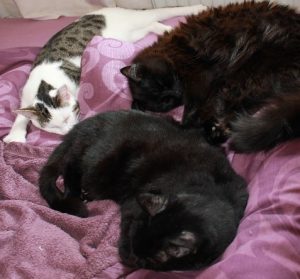